As Social As She Can Be

Things are ever changing. Three days ago (Thursday) Ashtyn had surgery. She was so brave. On the way to the hospital we discussed whether or not she should get a new NG tube. Knowing that in the near future she would have days of radiation, chemotherapy, and the transplant, she wondered if she would be able to have the energy and desire to eat the needed 1500-1800 calories a day. “What will make you more happy?” I asked her. She decided that an NG tube would take the stress off of having to eat all the needed calories. The plan was that she would eat what she wanted during the day and a pump would infuse formula through her NG tube into her stomach while she slept at night. Ashtyn felt good about this decision because it was her decision. And what made it most appealing is that the tube would be placed into her stomach while she was under anesthesia during her scheduled surgery. 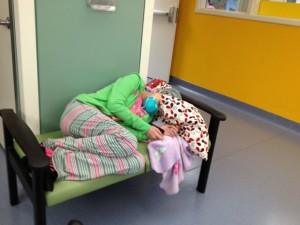 Waiting to register. Waking up at 7 a.m. is early 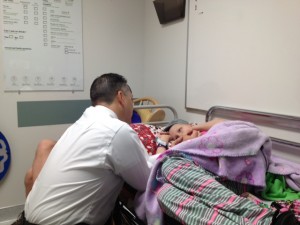 An oncologist talking to her. The doctors treat her so good!

What was she having surgery for? The bone marrow transplant team wanted her to have a new Broviac central line to be sure she started the transplant with an infection free central line. While under general anesthesia, a catheter was inserted by a surgeon under the skin of her chest wall and into a large vein that leads to the heart. A small incision was made near the collarbone where the tip of the catheter enters the vein and then it is threaded into the superior vena cava, right above the heart. The central line allows her to receive all the needed IV fluids, medications, and lab draws without having to be poked.

Along with the surgeon placing the central line, the oncologist performed a lumbar puncture and injected chemo into her spinal fluid. Also a bone marrow aspirate and bone marrow biopsy was done. Bone marrow has a fluid portion and a more solid portion. With the bone marrow aspirate, the doctor used a needle to withdraw a sample of the fluid portion. For the bone marrow biopsy, a larger needle was used to take a sample of the solid part. Pathologists then examine the sample to see if Ashtyn’s bone marrow produced any cancer cells. The initial results came back as having no cancer. Final results come back Monday. The two hour surgery went perfectly without a problem. We arrived at the hospital at 7:30 a.m. and headed home by 2:30 p.m. In and out. 🙂 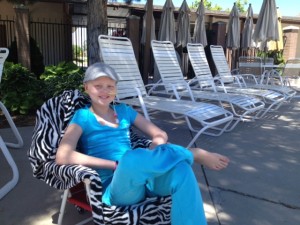 Relaxing at the pool 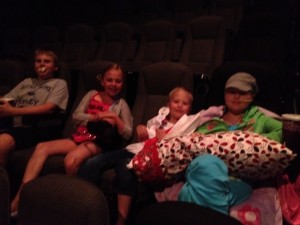 Going to the Movies

The following day, Friday, we discussed what we should do that night. Ashtyn’s time at home is limited and I felt it would be good for her to get out. At 4:10 p.m. Chandler suggested we go to a movie. I got on-line and noticed the movie “Ephraim’s Rescue” was playing at 4:30 p.m. and it appeared to be have a fairly empty theatre. The movie theatre was 15 minutes away. “We better hurry.” I am so glad we made it. The movie was a must see and Ashtyn enjoyed being out of the house way more than she thought she would. Saturday Ashtyn agreed to go to the pool. Upon arriving, we placed her chair under the shade, got her a large Powerade and chicken strips, and she relaxed in the peaceful setting for 1 1/2 hours.

She planned a family party

Since being diagnosed with cancer, Ashtyn rarely has had energy and endurance to be social. There have been occasions where she has enjoyed friends, however the majority of the time she has been overwhelmed in social settings. That is why I was shocked when on Saturday night she voiced her desire to have a party. She wanted a party where anyone and everyone was invited. “It’s my last chance until next summer.” And that’s true. Tomorrow Ashtyn is starting radiation therapy, which I consider to be the first day of the bone marrow transplant count down. Monday was the only option for a party. What have I learned about cancer? Just go with it. No matter how crazy it might be, her dad and I quickly agreed to have a last minute BBQ for anyone who would like to come. She also wanted a party with her grandpas, grandmas, aunts, uncles, and cousins. I immediately sent out a mass text asking if family would come the next day for a dessert party. Sunday, she had two grandpas, two grandmas, seven aunts, five uncles, and eight cousins show up.

I am grateful and proud of Ashtyn for not losing herself to cancer. She is a social girl who has always thrived when she is around people. Her body is tired and it’s difficult for her to handle a lot of stimuli, but she is letting her spirit take charge. 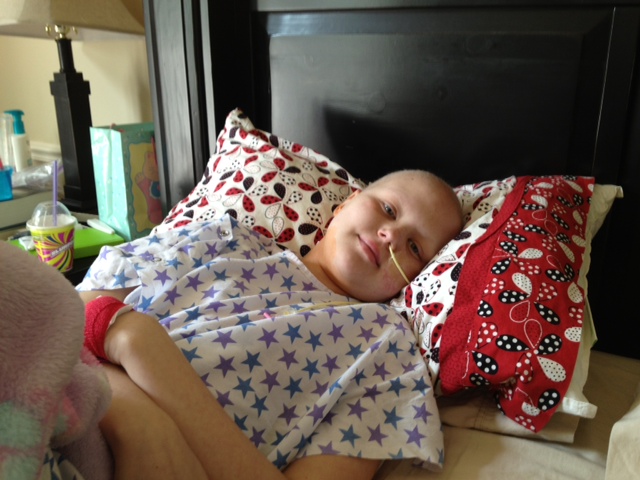 Ashtyn’s Story From the Beginning.

Ashtyn Poulsen was diagnosed with undifferentiated leukemia on January 30th 2013. She spent 70 days in the hospital during her first two rounds of chemotherapy treatment. During the third round of chemo, she was able to spend 1 1/2 months at home. June and July, Ashtyn will be in the hospital facing and fighting the Goliath called a bone marrow transplant. Ashtyn has been greatly blessed during her war with cancer. The prayers and love received by all those who support her have brought strength, peace, comfort, and miracles. Thank you for going through this journey with us.